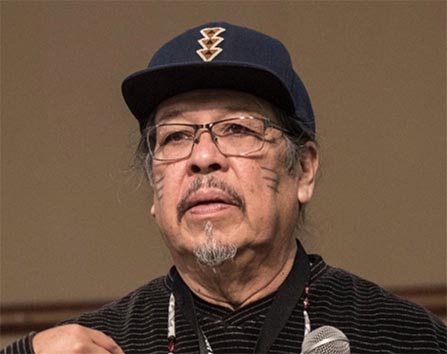 Statement: The policy to rid Indian people of their language was, in my opinion, done with the aim of wiping from our very souls the voice and teachings of our ancestors. Working to help restore those ancestral voices to Indian people and indigenous communities is the work I choose to do. I see first hand how our indigenous languages empowers both the young and old among us. I see individuals begin to see themselves as one of many, as a member of a growing community that has chosen to define itself with the ancestral knowledge they once believed and were often taught no longer existed. I applaud all who embark on this path to acquire their People’s Language.

I am a member of the Karuk tribe of northwestern California who belong to the lands nourished by the Klamath and Salmon Rivers and its creeks and streams. The Karuk language was spoken in the ancient villages of my ancestors and today I teach that very same language with one goal: to create 10 new Karuk speakers during the next 5 years. We have created several speakers during the last few years already. My process includes the one-on-one Master-Apprentice methods developed by AICLS over the years, the ASLA method, immersion techniques and years of experience teaching the Karuk language in schools and in community settings. Today’s technology and social networking has become a valuable tool to help reach our Karuk diaspora—we have descendants spread across the United States and internationally.

This site uses Akismet to reduce spam. Learn how your comment data is processed.